The conference, which was hosted by the University of Cyprus, Department of Civil and Environmental Engineering, focused on the following thematic areas:

The book also contains contributions by the SMART Research Consortium whose scientific coordination meeting on Sustainable Management of Available Water Resources with Innovative Technologies (SMART) was held within and in parallel with EWRA’s conference.

The list and abstracts of the papers included in the EWRA2009 proceedings:

It is true that water is the most abundant natural resource on earth. It is also true that for hundreds of years in the past it was commonly taken for granted as nature’s gift. The value of water has been regarded by philosophers and scholars in ancient times as the “most precious resource” and “the driver of nature”. Long after the industrial revolution, water problems gradually emerged related to water scarcity, water pollution from natural hazards caused by extreme phenomena of the hydrological cycle.

During the last century an increasing abuse of water resources was practiced together with expanding population, industrialisation and urbanisation, which increased the burden on governments and professionals to safeguard water quantity and quality for the domestic, agricultural and other economic sectors. The booming irrigation development in most countries created more stress in the water sector since the “requirements” were multiplied. Big water projects together with the expansion of economic activities, created a higher but also more
vulnerable equilibrium between availability and demand. The consequence of this “ever”- continuing tendency seemed to reach a deadlock due to the new problems of increased pollution, overexploitation of aquifers and stagnation of water sources.

The approaching global water crisis was predicted by scientists in conferences and symposia from the early seventies. However, governments and international organisations seemed to be reluctant to realise and appreciate the seriousness of the global water situation. Even in the International conferences organised by the United Nations in Dublin and Rio de Janeiro in the early nineties, water was a rather minor issue and was discussed indirectly. The primary interest of the participating leaders of state was focused on issues such as climate change, biodiversity and deforestation.

Recently, an increasing number of states started to recognise that water problems are multiplying and that several anthropogenic causes lead to deterioration in the water availability and use. Climate change is the most recent threat to water conservation, worldwide. According to the IPCC projections during the next decades, the magnitudes and the patterns of precipitation and air temperature are expected to change in most parts of the world. Expected sea level rise also threatens most of the coastal aquifers and the water security of most coastal zones.

It is fully understood that the “climate change” hazard is pressing the world to curb emissions of CO2 and other greenhouse gases which are blamed for the climate change. We all hope to reach a consensus during the Copenhagen World Summit and a brave new agreement will be signed replacing Kyoto protocol. It is also fully understood that water and the environment will be affected mostly by the anticipated climate change. However, whatever will be decided in Copenhagen on energy and emissions, it seems indirect and inadequate for solving the water problems which exist and will increase with or without the various trends in gas emissions. In short we believe that “water problems” are affected by climate change but can be also dealt with by more direct and efficient methods. In this context, although EWRA participates actively in the ongoing dialog on climate change, it focuses its attention on direct actions on water problems (availability and demand) at the national, regional and international level. Our activities (meetings, symposia, conferences, journals and publications) reflect exactly this priority.

The EWRA Conference in Cyprus is expected to enrich the knowledge among academics and professionals as to how to improve the planning and management of water resources in an integrated, equitable, sustainable and adaptive way to face present and future water problems. In this respect and focusing on reducing the risk from water related hazards, EWRA systematically promotes proactive and preparedness planning with the most democratic procedures through the involvement of all stakeholders, aiming at tackling water problems efficiently and comprehensively, while protecting the environment. Looking at the topics, the papers submitted, and the list of participants, I am sure that the conference will be fruitful and useful for the participants, guiding our actions directly against “problems and causes” with the objective of securing water availability and quality for future
generations in our countries.

Interview of Despo Fatta-Kassinos in the November newsletter of Premier project (https://imi-premier.eu/) 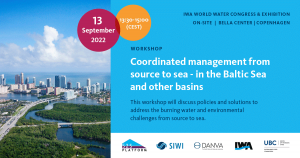 The report of Source-to-Sea Workshop at IWA WWCE that took place in Copenhagen on September 13th 2022 is here! Take a look by clicking on